Schwarzenegger Elegantly Speaks Up for U.S. Democracy and Denounces Trump 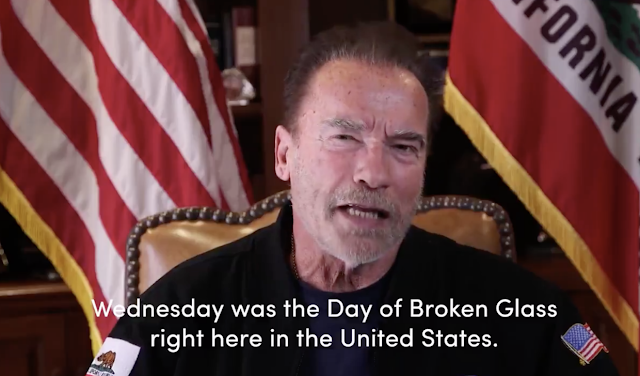 Schwarzenegger Elegantly Speaks Up for U.S. Democracy and Denounces Trump

Posted by Widescreen Online Review Plus at 12:50 PM No comments: 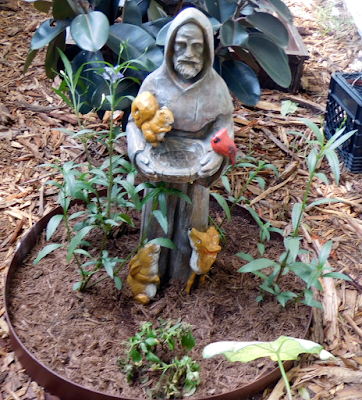 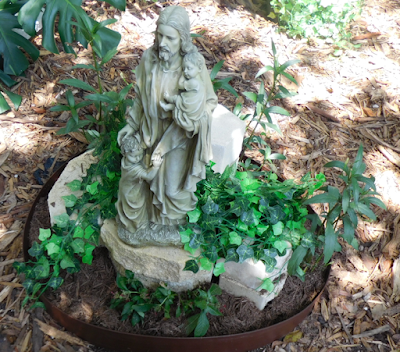 The Ruellia were in bloom this morning and the Penta are a little shell shocked but should recover now that I have mulched their rings. Below surrounded by blooming minimums, roses and Ruellia and the plants. 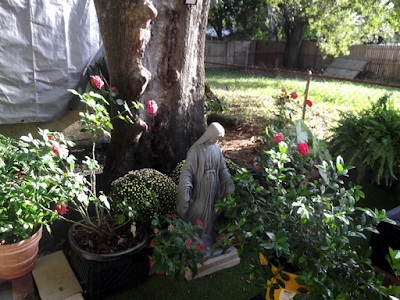 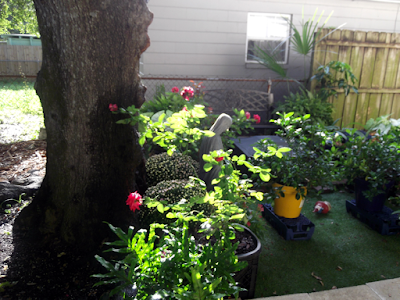 Posted by Widescreen Online Review Plus at 10:36 AM No comments:

As you can see, it is a statue of Jesus with children. Regardless, of what anyone thinks, I love kids. My past work with kids and several of my web sites are proof of that.
.
Nevertheless, because this statue is lighter than I expected, I glued it two one of the edging stones, which is as close to the color of the statue as possible. I then placed it on top of one at the bottom and added more around the sides and the rear of the statue to create a mountain effect. The ivy vines are not real.  I know its cheating but I wanted to hide the open spaces between the placements of the stones. The tall flowers planted in the circle are lavender colored Ruellias and a red penta shrub. I transplanted them into the circle the other day, so they should all return to bloom soon.
The overall effect is beautiful and dramatic. 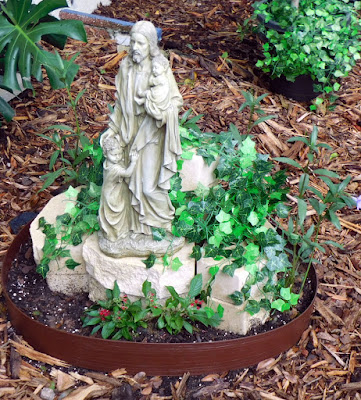 Let me say this:

We are all Jesus children, the young, and the old. Some people in this modern age tend to believe or want others to believe that when we are older that only infants and small children matter in the eyes of Jesus. Well, they are wrong. We adults will always matter too. After all, weren’t we once his infants? 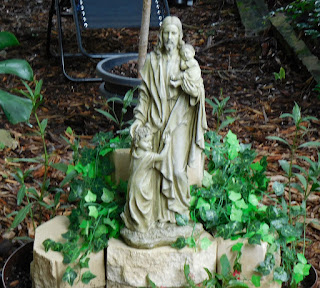 This article was first posted on my Seven Ninety Seven,  "Home Of The Bargain Queen" website, which is where all of the DIY projects are posted. To see the other Mary garden update click one of the links above.
Posted by Widescreen Online Review Plus at 11:17 AM No comments:

Recently, on my website Seven Ninety-Seven "Home Of The Bargain Queen", I wrote several articles about creating a Mary Garden. On that site, I wrote that the creation of the garden was my most ambitious DIY project to date. It has been a seven-month project that began with the removal of what appeared to be a decade of dry, dead oak leaves from the three trees back there.

Although never complete (I mean what garden is really complete) this garden was a labor of love in which my only helper was my husband, Stanley. I think we did well for an elderly couple both pushing toward age 70. 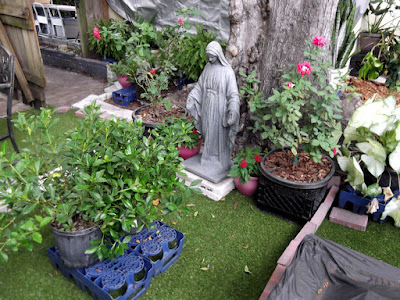 Now that the basic design of the garden is an actuality, I am looking forward to its continual growth and beauty. Below is a photo of Mother Mary in the garden. To see the progress of the whole garden that also a statue of Saint Francis of Assisi, click the link above.

Posted by Widescreen Online Review Plus at 5:03 AM No comments:

Jesus proposed another parable to the crowds, saying:
“The kingdom of heaven may be likened
to a man who sowed good seed in his field.
While everyone was asleep his enemy came
and sowed weeds all through the wheat, and then went off.
When the crop grew and bore fruit, the weeds appeared as well.
The slaves of the householder came to him and said,
‘Master, did you not sow good seed in your field?
Where have the weeds come from?’
He answered, ‘An enemy has done this.’
His slaves said to him,
‘Do you want us to go and pull them up?’
He replied, ‘No, if you pull up the weeds
you might uproot the wheat along with them.
Let them grow together until harvest;
then at harvest time I will say to the harvesters,
“First collect the weeds and tie them in bundles for burning;
but gather the wheat into my barn.”’”

He proposed another parable to them.
“The kingdom of heaven is like a mustard seed
that a person took and sowed in a field.
It is the smallest of all the seeds,
yet when full-grown it is the largest of plants.
It becomes a large bush,
and the ‘birds of the sky come and dwell in its branches.’”

He spoke to them another parable.
“The kingdom of heaven is like yeast
that a woman took and mixed with three measures of wheat flour
until the whole batch was leavened.”

All these things Jesus spoke to the crowds in parables.
He spoke to them only in parables,
to fulfill what had been said through the prophet:
I will open my mouth in parables,
I will announce what has lain hidden from the foundation
of the world.

Then, dismissing the crowds, he went into the house.
His disciples approached him and said,
“Explain to us the parable of the weeds in the field.”
He said in reply, “He who sows good seed is the Son of Man,
the field is the world, the good seed the children of the kingdom.
The weeds are the children of the evil one,
and the enemy who sows them is the devil.
The harvest is the end of the age, and the harvesters are angels.
Just as weeds are collected and burned up with fire,
so will it be at the end of the age.
The Son of Man will send his angels,
and they will collect out of his kingdom
all who cause others to sin and all evildoers.
They will throw them into the fiery furnace,
where there will be wailing and grinding of teeth.
Then the righteous will shine like the sun
in the kingdom of their Father.
Whoever has ears ought to hear.”
Posted by Widescreen Online Review Plus at 5:41 AM No comments:

Prayer for Deliverance and Healing 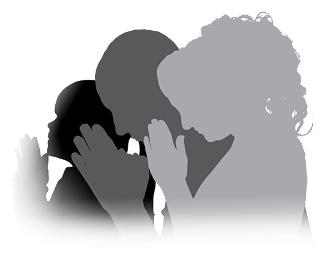 Prayer for Deliverance and Healing

“Heavenly Father, thank you for your precious grace and mercy. Lord, thank you, for letting me see another day. Father, thank you, for a new direction and fresh hope. God, as I go through life trying to get close to where you would have me, I’m grateful. That you have never left my side no matter the situation, no matter the state, no matter my mistakes. Lord God, as I continue to move forward with each day, I thank you for your light that keeps on shinning within. For your powerful hands that continue to hold and your gracious love that protects me. Lord, You took a sinner like me, the least of those expected. You are using me for your glory. In circumstances that I didn’t ask for, but you chose me for what role you have in mind.

In Jesus's name, I pray, Amen.”
Posted by Widescreen Online Review Plus at 2:44 AM No comments:

A Catholic's Life, Anew is now a part of Widescreen Online Review Plus.

Check back for updates.

Posted by Widescreen Online Review Plus at 12:56 PM No comments: