By now, many of you have guessed that I am a great admirer of medieval and renaissance art. Over the years, I have developed an unquenchable passion for the artworks of several painters from those times. My taste is art of the period runs the works of  many well-known lay painters, whose daily earned their livelihoods in cities like Paris, Florence, and Venice, to the little known artists, who were priests or monks and whom painters- many which were murals and sculptures - graced the cells of many long forgotten monasteries across Christian Europe.

The painting below is another of the noted French painter James Jacques Tissot entitled, “What Jesus Saw from the Cross.” This painting is breath taking and it awakens the viewer’s perspective of what was to be Christ at Calvary. To really experience the full affect of this marvelous painting click the link. If you are using IE7, you might have to click the painting to see it in full view, which I recommend. 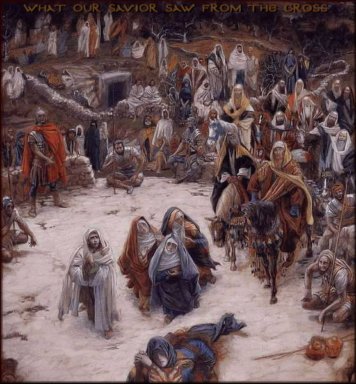 James Jacques Tissot has quickly become one of my favorite artists and a few months ago, I featured his work on the BTCC Youth Ministry. Tissot was famous for his exquisite paintings of beautiful English women and most people think he was English. In fact, Jacques-Joseph Tissot was born October 15, 1836 in Nantes, then a thriving port on the Loire estuary in western France. He adopted the name James as an anglicized form when living in England. His friends were Manet and Degas, with whom he shared a teacher in the painting school in Paris. From 1885 until his death on August 8, 1902, he became very religious and spent the last 17 years living as recluse painting religious pictures.